Okay, this is the time of year when we get get a handful of book cover design requests. One such request is for a political science title from Temple University Press titled God Talk. It sounds like a great topic. At first glance, it looks like a discussion about faith being leveraged in political spin. Anyway, I’m just getting under way. I haven’t had to package many things with the word “God” so I thought a cursory search through Google might be as good a place as any to get me started. The image below is a screen shot of what a quick image search turned up. 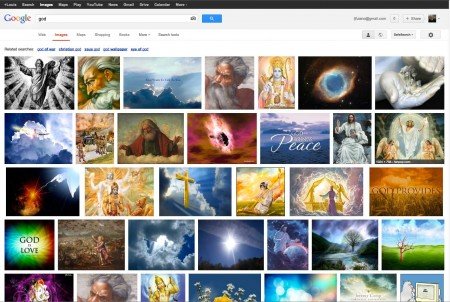 I’m not gonna say I was surprised, but I found the returns to be a little stilted and conventional. I would have thought that by now, we had a more forward thinking perception on the “G”man. Granted, some of these images are archival works created before the 1500s, but many publications and illustrations still seem stuck in presenting the same images we were shown as children. Swelling clouds and the ubiquitous bearded guy in a robe seem to carry the theme. For typography, Trajan is often the go-to font (I suppose you have to give a nod to the chiseled roman lettering when presenting things Christian). It’s no wonder the card carrying atheist finds it so easy to take shots at the faithful.

Speaking of which, I also found a few covers that warned about the flawed thinking in being a believer. These had a noticeably minimal treatment that was mostly type driven. Strange, that’s exactly the direction I would have chosen. Granted, I’m a designer not a theologian. The atheist argument is always a charged conversation and I don’t profess to know the more detailed talking points, but I’m always curious to see it unfold. It’s so steeped in logic and intellect and it usually helps us to better understand ourselves. Still, it requires a strenuous effort to realign a basic instinct, and it’s always at risk of sounding like so much noise. Whereas, the concept of God is more hard-wired and as a result, seems like a real toe-tapper. So why is the common imagery so damn (no pun intended) stuck? But I digress…

While exploring the range of graphic design treatments is a real gas, I also realize I need to be careful here, this is a book about leveraging religious position for political gain, not a book about theology. Ah yes, the academic voice. So begins my afternoon of packaging the cover.