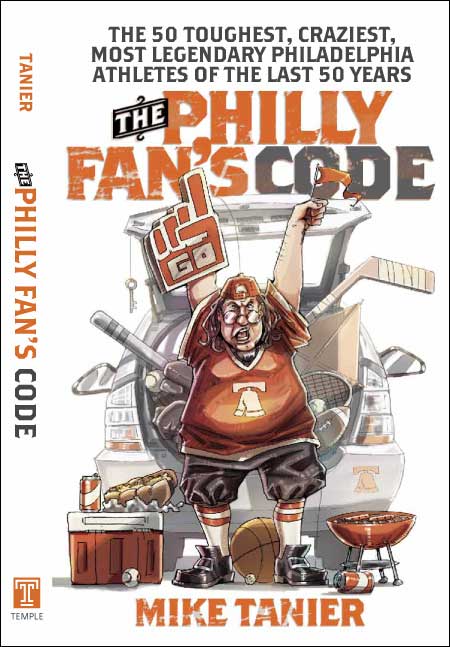 We’re getting close to the final design of a book cover for Temple University Press. Because of budgets, many of the covers done for a university press are a fairly straight shot. The publisher usually tries to work very efficiently with the designer to keep the design process as streamlined as possible. However, every now and then, they get a title that they feel will have an appeal beyond just the academic community and they handle it with with a more pointed focus.

This cover for Mike Tanier’s book, The Philly Fan’s Code, was being handled in such a way. Charles Ault of Temple University Press made a good call in hiring Illustrator Michael DiMotta to provide the cover art. He was asked to incorporate all known pro sports artifacts, Ben Franklin, tailgating and the obsessed (but not too obsessed) fan. I basically just tried to stay out of the way and work with the title and the unwieldy sub-title, while giving the art as much room as possible. It looks like the final cover will use the gritty more distressed typography. It is a book about Philly sports fans now, so a war weary treatment for the title art isn’t such a stretch.